So, in the two years that I've been writing this blog, I may not have had the opportunity to express how much I dislike shark movies.
Well...not specifically shark movies. I think it's more the "I'm-stuck-out-in-nature-and-wild-animals-are-gonna-eat-me" movies. I've yet to see one that I thought was scary or was, at the very least, interesting.

I'm not saying all of them, but, yo, ever since Open Water there have been this string of Wildlife Survival movies that just...well, they suck. It's gotten so that now every time I see a movie that has a wild animal and a couple of people in it, I'm like,

That being said, I thought, maybe I would give another one a try. It's been a bunch of years since the last one, maybe somebody finally figured out how to make one of these movies scary. How'd that go?  Well...
This week's movie! 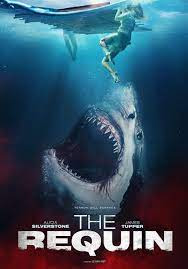 First off, before we get going, you can now click the titles of the movies I mention in this blog if you want to rent it from Amazon Prime. I'm telling you this now for a couple of reasons:

1) Amazon Affiliates pays me every time you guys watch something I recommend (Love horror movies, but I also like getting my bag)
2) The Requin is only available in 4K UHD on Prime, which, if you have a 4K tv, I HIGHLY recommend you watch it that way. We'll go into why in a little bit. 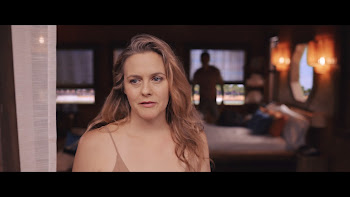 All right, so our story begins with Jaelyn(Silverstone) and her husband Kyle (Tupper). Jaelyn and Kyle are on vacation in Vietnam after she has a miscarriage. During their trip, a big storm comes in and washes away their hotel room, which just happens to sit on the ocean. 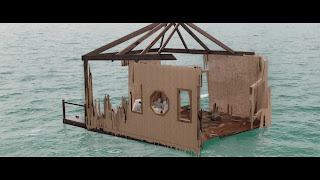 And now, they have to survive.  Simple right?

So, I'm not going to take you through this movie moment to moment this time because I don't want you to fall asleep while you're reading this.

See, we spend about 50 minutes of a 90-minute movie going over Jaelyn and Kyle's relationship issues, only to never speak of them again once the movie eventually gets going.
The miscarriage, for example, is only shown in flashes. We don't know hardly any details. We just know it happened and now Jaelyn has PTSD when she sees blood in the water...

Except when they're actually stranded and Kyle's leg is broken and he's bleeding in the water. Then she's fine.
When we do get to the actual event that strands them on the ocean, we're treated to a series of stupid that push them closer and closer to their dooms. 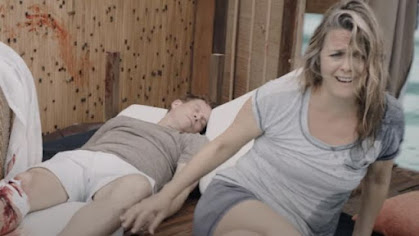 1) They don't leave the house ASAP
Two things. First, when the storm hits, they don't immediately get out of the house. They kind of go "Wah, what do we do?" until Kyle gets pinned under the bed and has his leg broken.
And after that, the house gets pushed into a rock and they decide not to try to climb the rock that's close to land so they could be rescued. This results in them being further screwed when they drift out to sea. 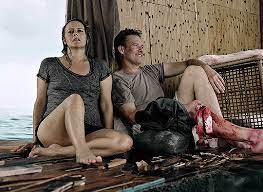 2) They never even attempt to build a sail
Look, I'm not saying they would have succeeded. I'm an average person, you know. I can't say that I have ever attempted to build a sail before in my life, however, I don't understand not trying.  I mean, LOOK AT ALL THE MATERIALS THEY HAVE IN THAT PICTURE! They have wood, sheets, bamboo-like things, empty water bottles, just tons of shit to work with.
But where would they go if they can't see land, you ask? Well... 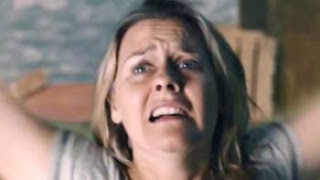 3) They burn down their only refuge
At a certain point, they see both a plane and a ship. Jaelyn gets the bright idea to start a fire. The fire gets out of control, and they end up in the water.

They could have just made a torch. They made a damn campfire. On a wooden floor.

So, you're probably thinking that all this happens early in the movie. No, nearly 60-70 minutes in at this point.
Right, so at this point, the shark comes in, right? I mean, this movie is called The Requin and there is a whole ass shark on the cover, right?

Nope. Still gotta hang with Jaelyn and Kyle on a Titanic raft. I mean, we get a dolphin fake-out,  but that's it, really. 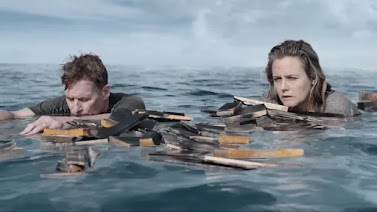 Okay, so FINALLY the shark shows up and attacks Kyle. In the last 40-30 minutes of this movie, Kyle's legs get bitten off and he dies, but they end up drifting to land.  End of movie, right? 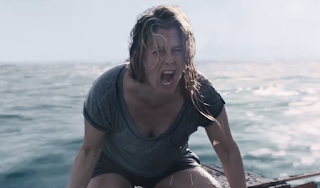 No. The shark, which, by the way, we don't really see all that good yet, (We get some shark footage from Shark Week on the Animal Channel, but that's really it), The shark attacks her on shore and bites her leg. 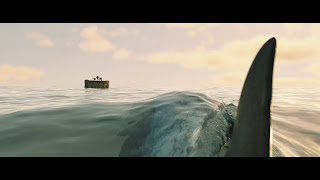 She gets to land and finds a fisherman. The fisherman helps her, but then the shark kills the fisherman.  The shark tries attacking her, but she finds an engine (which she could have used to get the hell out of there) and fends off the shark with it. 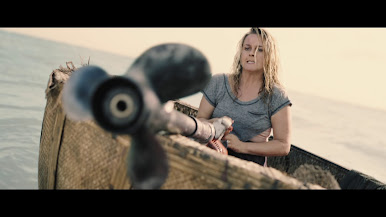 And here is where the 4K UHD comes into play. I couldn't find a proper gif for this, which is a shame because Oh, My God, y'all. The shark in this movie... 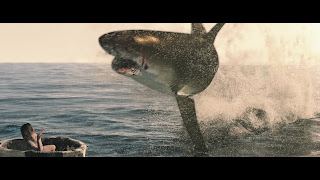 I have never in my life seen a more fake shark than this and I was alive when Jaws first came out.
If I have said it once, I've said it a million times. CGI is not like Franks Red Hot. You CANNOT put that shit on everything.
And I don't have a 4K TV, myself, but lemme tell you, as much as I love a good garbage movie, I can only imagine how this scene has to look in 4K. 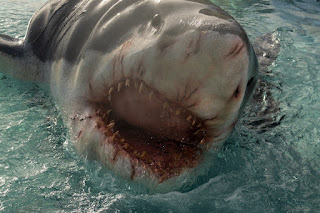 Anyway, Jaelyn kills the fake-ass shark and that's it, right?  The titular character who's only in a third of the movie is dead, so?

I mean, it's almost over. She ends up drifting on the boat (don't know why. She was really close to land) until she ends up near a fishing village.

Yeah. That's it. That's this trash movie in a nutshell.
I love a good garbage movie. Especially when it's on Room level like this one is. But I think the Horror Movie Gods would smite me if I gave this awful movie a jewel, sooo...

If you like garbage like I do, though, definitely watch this film.
Anyway, next week's movie, The Long Night. People wear animal heads on the cover. That's a good start.