Slightly Irritated Behind You 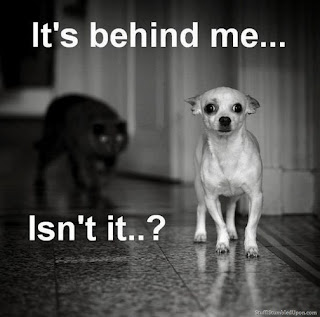 I might’ve mentioned that I love a good bad horror movie a few times in this blog and it’s true. I love it when a movie is so bad that it transcends its own awfulness and ends up being kind of awesome. Remember how I said “Don’t Kill It” wasn’t “Room” bad? Yeah, I can’t really say that this time. Ladies and Gentlemen, I have found the “Room” of horror movies. 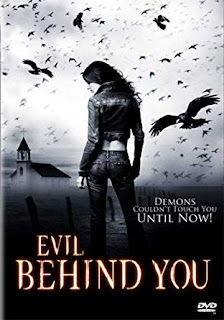 Evil Behind You starring Hilary Kennedy, Manual Velazquez, D.C. Lee, Jim Garrity, David Lee, Gwendolyn Murphy and a cast of Arabs with stereotypical “I’m terrorist and I keel you!” accents. 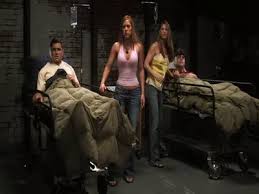 So, two couples Lisa and David(Kennedy and Velazquez) and Debra and Tony(Murphy and Lee) have been kidnapped. The two women wake up to find their men are in hospital beds hooked to wires and their ears are bandaged. Between the four of them, they figure out that the men had been operated on. Pretty soon, Tony starts freaking out and saying that there is a monster in the room with them and the fun ensues. 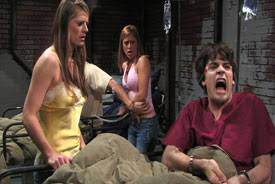 So, okay, after about thirty minutes of these four actors chewing the scenery, we find out that their captors are what we have to assume is a terrorist group who have taken a scientist(Garrity) hostage in order to test this magic serum. Now, I’m hoping that the terrorists were probably an attempt at drawing on the whole post 9/11 American fear, blah, blah. I say I’m hoping because the characters came off racist as all hell.

The two terrorists that had lines (One of them, I swear, was named “Abdul”) had two, distinct accents, by the way. I’m pretty sure one of them was played by a Hispanic guy. I guess the director figured “Eh, their foreigners. Nobody’ll notice.” 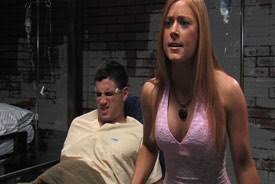 All right, so while the Tony and David start seeing imaginary monsters, Debra gets pissed at Tony for freaking out just because she’s a jerk. In a way, I can’t blame her, actually. Tony’s acting was so bad that I was getting a little pissed too. In between those sequences are these flashbacks of events in David and Lisa’s lives. Lisa’s sister kills herself because she was molested and she blames God for it. David was in love with another woman who got married and I literally stopped caring halfway through this sentence.

The only thing that’s important is that Lisa hates God now. That revelation is the moment I realized, Oh, no…this is a Christian Horror Movie.

Let me be clear about something. I don’t have a problem with Christians or the Christian faith. And I can definitively say horror movies with Christian themes can be and have been well done. The Omen series, The Exorcist, The Seventh Seal, even Hellraiser got it right. But there are some horror movies out there that were produced and directed by Christians who have missed an essential component of being able to create a good horror movie. You have to have actually seen a horror movie.

One of the directors, by the way, is Jim Carroll. You might recognize him from “Fox and Friends” and “Marriage Boot Camp”. He also gave himself a bit part in this movie. No, he can’t act either. Jim, I’m seriously gonna need you to do some research before you do another horror movie. Please. 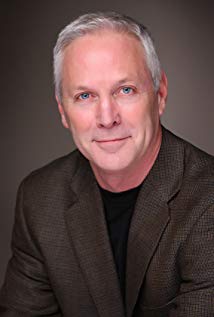 Tony and David keep seeing demons that, we, the viewer, don’t see yet, by the way, which means they have to act like they see something horrible. I, for one, would have an easier time believing they have food poisoning.

Okay, so the rest of the movie is pretty disjointed. We don’t learn any new information, really. It just kind of alternates between flashbacks, fake terrorists threatening the nice white scientist man, and Tony and David fake seeing monsters.

Oh, oh, wait, I almost forgot. There are two other men in the room who are handcuffed to hospital beds. They wake up at different points in the movie and attack everyone. The first one Lisa manages to beat all WWE, chair match style. The second one attacks them way later on. He gets shot a bunch of times, I don’t know.

This as a really hard watch. The story has all the strength of a catatonic noodle and the acting, oh, the acting.

But wait! I almost forgot. So, Tony and David are seeing monsters this whole time, right? We don’t see what they see for most of the movie. Well, eventually we do see the monsters. Unfortunately, I couldn’t find a shot of them online, so you’ll have to actually see them yourselves. I will say this. For those of you who remember what it was like to watch those old stop animation clay monsters way back in the day, remember how you watched them again some twenty years later and thought “Wow, this is laaammmee”? It’s kind of like that, except with none of the high quality of those Claymation monsters.

Yeah, so, needless to say, I was going to give this one a raspberry, but I really, didn’t like it at all. Like there were no parts of this one that I found even ironically amusing. So, instead, I'm going against script and dropping a Disapproving Prince for Evil Behind You.

I may not be the foremost expert on Christian horror, but I’ve sat through enough Easter sermons to know scary when I encounter it. I expect better of you Christian filmmakers.

Okay, so next week we are conquering a classic series The Exorcist and Yes, of course, I’ve seen The Exorcist. What kind of horror blogger would I be if I had never seen The Exorcist? I haven’t, however, seen the last two installments of the series, which means next week I will be doing a DOUBLE FEATURE!!

Until then, I’ll see you next time!