First off, A public service announcement.

I hope you all are holding out all right out there. I know we’re all probably a little stir crazy, but hang in there. If you’re looking for entertainment resources, your local library might be closed, but most of them have online resources that you can tap into. Services like Hoopla, Overdrive, Libby – just to name a few have free ebooks and movies just for you.

Yes. Even horror movies. So, take it from your friendly neighborhood horror junkie and librarian, stay calm, wash your hands, and watch horror movies. <3 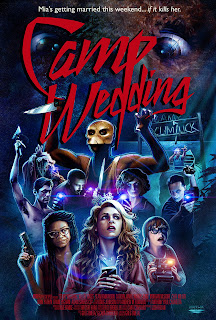 So, let me set this up for you. Mia (Gates) has decided to have a destination wedding at an old, abandoned camp because people do that apparently. 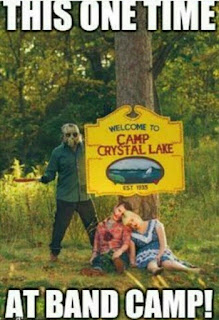 She goes up to Camp Creepy with her wedding party (a cluster of self-absorbed cell phone addicts) and as they try to get the destination ready, someone has hacked into their phones and is picking them off one by one…sort of.

This freaky little movie falls under the category of a slasher film and you know what that means. It’s time for the Four Bs:

There is no blood in this movie. None. Not even a papercut.

Nope. No, tiddies either. No side or under boob. Nope.  Not a boob in sight

So, everyone gets weird phone calls from unknown numbers right before they’re taken out. The victim has a polaroid taken of them in their final moments and posted to the internet. Sounds creepy, right?

Except, they turn out not to be dead at all. There’s a ghost (of a dead girl or pilgrim witches or angry murdered Indians – hard to tell) going around trapping people in their cell phones so they effectively become cell phone zombies.

Hey, don’t look at me like that. I didn’t write it. 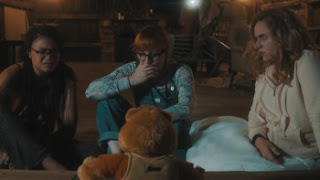 Bad Acting: F Minus
Everyone in the cast was pretty good in the acting department, which I’m thankful for. This movie was completely ridiculous and the actors do a great job of holding that up to the light. This movie would have crumbled if the cast wasn’t so entertaining.

So, you’d think with such abysmal scores, I would give this movie a raspberry.

Yeah, this wasn’t a bad movie – I mean, it was a “bad” movie, but it was actually pretty great so long as you don’t take it seriously…at all. This is a goofy movie with a goofy premise and I appreciate that.

However, I’m not giving it a fully red jewel. This movie actually would have been better with blood. Buckets of it.

Shut up. There’s a time and a place for gore is all I’m saying and the time and place was about 35 minutes into this movie.

All right, you might be thinking that with the library being closed, I don’t have any movies to review for next week. Well, you’d be wrong. Luckily, I stocked up right before everything went down and I’ve got one more left.

Countdown. This one’s a newer one and, with the bad movie train running along, I kind of hope this is pretty bad. Sometimes terrible movies make you feel better about life when things are dark.

Is that Really How All Horror Stories End?

What up, horror nuts and welcome to another WTFHM!

This week, I want to talk about the glorious feeling that a properly executed twist ending produces. Remember the first time that ending to Fight Club hit you in the teeth? Or the whole being fooled into a prequel trickery in Final Destination Five? Even M. Night Whatshisface’s one good movie The Sixth Sense got me the first time around. Nothing beats watching a movie that makes you make this face by the end of it.

I have to tell you, the older I get the more I appreciate a good twist ending, especially since it’s harder to get me with one these days. I’m not bragging, mind you. I’ve just watched way too many horror movies.

So, I’ll bet you’re hoping to hear about the fabulous movie with the intriguing twist ending that will leave you speechless, right? 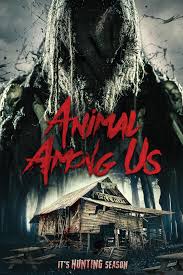 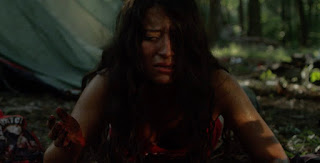 So, the story opens with a camper who just narrowly survived being mauled to death by…something. She has a camera. 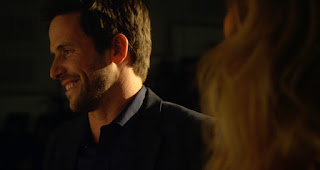 We switch over to a Roland Baumgarden(Oliver) who also wrote a horror book surrounding the mysterious deaths of two girls at Camp Merrymaker (The camp where the surviving camper was) and is now trying to write the next great novel. He despairs to his wife(Daniels) about it and she utters the following phrase: 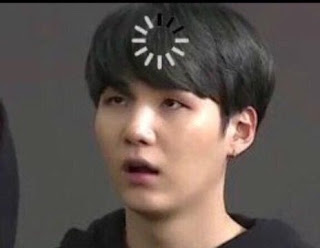 Also, Roland is also a teacher at a college...and he's banging one of his students. 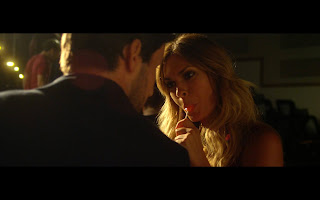 Anyway, back at Camp Merrymaker, sisters Anita(Oleynik) and Poppy(Donlon) are currently running the camp which has been closed for some time. One night Poppy spots a Bigfoot enthusiast climbing over the railing. 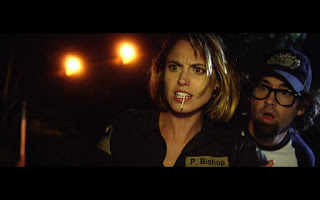 You see, this guy is looking for a Sirsquatch.

Yeah. A sirsquatch. No, I do not know what that is. I even Googled it think that maybe I’m just ignorant of the many varieties of sasquatch creatures that are supposedly out there. Maybe the actor just had no idea how to pronounce Sasquatch and they let him get away with it. I don’t know. Anyway…

Sirsquatch Guy(Murphy) hitches a ride with Poppy to their base and starts asking Anita a whole bunch of questions. “Have you seen a sirsquatch? Is that stuff that that writer wrote true? ARE YOU THAT CRAZY CHICK FROM THE BOOK THAT EATS BABIES???” 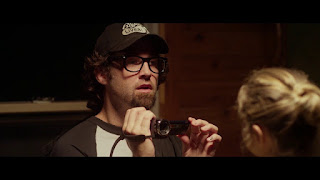 Oh, how I was praying for Sirsquatch Guy’s death.

So, anyway, they also find the mysterious camper, whose name happens to be Lupita. Lupita is pretty knocked around and is speaking mostly Spanish. So, of course, Poppy just assumes that she doesn’t speak or understand English well. And so, the a very problematic narrative begins.

Yeah, so, Anita escorts Sirsquatch dude out of the camp and he sneaks back in where he is promptly attacked by “something”.

Meanwhile, Roland gets fan mail from Anita and Poppy’s mom asking him to swing on by the Merrymaker camp and help them promote the new opening for it. Roland, fully of hubris is like, “Yay! Let’s go!”. His wife is like, “I’m good on that.” He goes anyway. 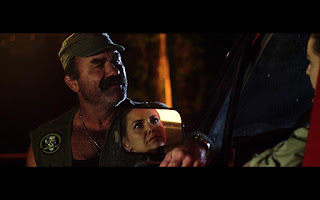 So, somewhere in this, a character named Burl is introduced. Big, hairy, disturbingly flirty with the sisters and has vowed some kind of undying allegiance to Anita.

Ooookay, so, Roland shows up to the camp and Anita’s all fangirling out about it. The sisters, Burl and Lupita all have dinner with him. When they ask who Lupita is, they just brush her off with a ‘She no speaky good English”. She, of course, blows up at Anita because, well, she can speak English just fine. Again, Anita:

Just then, Sirsquatch Guy shows up all beaten up. He tells them that something attacked him and dragged him down into its lair and they need to do something about it. Anita’s like; “What are you talking about? There’s no such thing as a Bigfoot.” 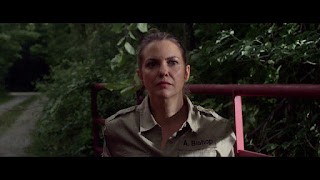 They argue, blah, blah, Sirsquatch Guy gets escorted out by Burl this time. Pretty sure Burl kills him because we don’t see him again.

So, Anita takes Lupita and gives her the camera she came with. (See, Anita saw what was on the tape already and erased it. It was a video of them finding a mysterious bigfoot like creature, yadda, yadda) 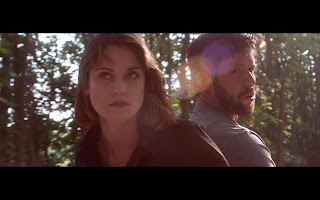 Anyway, she gives the camera back to her and leaves her alone in the cabin for Poppy to come and find. She doesn't because she's busy with Roland...

After a while, Lupita tries to leave and promptly gets killed by the mysterious creature and dragged away. 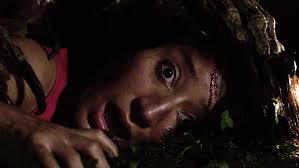 They find her remains the next morning and Poppy and Roland freak out. Anita goes all “All is well” on them, but she agrees that maybe they should go on a search for the thing out there. She gets some guns with Roland and Poppy gets attacked and dragged into the lair of the supposed Sirsquatch.

Now, what happens next I’m a little blurry on because we’re about an hour and some change into this movie and I drift off for a second or two.

In any event, Poppy escapes the lair, then Roland is attacked and Anita is still going “All is well.”

Roland demands to be taken to his car and they take him only to find that it’s been taken apart and rendered undrivable. Roland flips out, Burl steps out of the shadows like:

And Anita sticks him in the neck with some kind of knock out liquid.

Oh, by the way, back home, Roland’s wife (who doesn’t have a name, I don’t think) finds out he’s been banging one of his students. That’s just barely significant information.

When Roland wakes up, he’s been tied to a chair. The sisters show him a video of the girls being attacked and murdered. See, there was supposedly no tape of it, thus hiding what really happened to them. 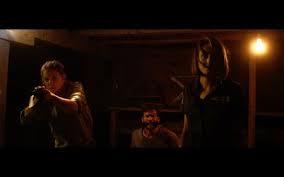 No, I don’t know what the point was.

Anyway, that was big twist number one. Big twist number two was that the whole getting him to come out to the camp was a ruse to extort money from Roland.

What? You say? So, they were just using the monster to scare him?

Nooo, you sillies. See, they actually believe there’s a bigfoot out there.

No, there isn’t a bigfoot out there. And here’s big twist number three.

Burl brings in their long lost brother who, through a flashback, we learned killed the two girls and was beaten savagely by their mother. Burl found out about it and the mother (who was banging Burl – that flirting earlier was just made all the creepier) convinced Burl to stage a kind of accident death by putting them in the woods and scarring up their faces with a decapitated bear claw.

Okay, so Anita tells Burl to kill their brother. Burl reluctantly does it and Anita kills Burl. Why? I don’t know!

Anyway, they extort money from Roland (not much, because he only had one book for crying out loud), and they untie them. Roland gets the jump on the sisters and tries to escape, but monster brother wakes up and attacks him. Anita scratches up his face with a bear claw and they drop him off at his house. 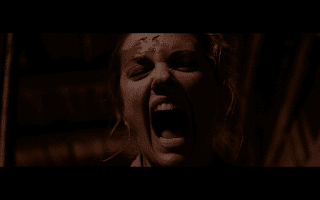 And No, this is not the end of this god-awful movie. 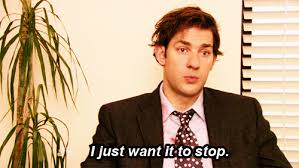 Three months later Roland and his wife are moving. Kara (the girl that Roland cheated on his wife with) shows up with a key that disappeared from their house ages ago. Roland’s wife then tells him that she started writing her own novel based on what happened to him because “horror novels end when you kill the monster or the monster kills you”, implying that he’s a monster or something, I don’t know.

God, I hated this movie. It’s been a while since I felt this level of vitriol for a B Movie.

I mean, it stunk. Bad. It was all over the place. The twists weren’t twists so much as information that you already kind of knew and, worst of all it was BORING, which is a hard no from this horror lover.

So, you guessed it. Big old raspberry.

Next week! The next movie is going to be Camp Wedding. It looks awful, but it’s got to be better than what I just watched, so I’m optimistic. Wash your hands out there and don’t touch your face and I’ll see you next week!