I Will Fight You in the Parking Lot

Now, I know I've been gone for a minute after I said I wasn't going to be gone for a minute, but, well, things happen. I've had some major life changes that I'm not going to go into here because my simple little life is not what you came here for.

What you came here for is to talk about the scary stuff and boy, do I have a movie for you.

Today, my friends, we're going to talk about Candyman.

Now, it's come to my attention that a lot of you young'uns there are looking at the whole Candyman thing like,

Listen to me, you sweet summer children.

As human adults, we all kind of decided that horror movies are make-believe. Like we know there's no Freddy or Jason out there waiting for us. The horror movie monsters aren't reeeall. This is a fact.

And yet, horror movies still scare us from time to time. And within the black community, the hardest of the hard will talk all kinds of mess about what they would do if Jason showed up at their front door.

But I PROMISE YOU, those same Harder-than-a-motherfucker dudes won't say Candyman in the mirror five times.

As you might've guessed, this is one of my favorite movies of all time, not because it's probably one of the scariest movies of all time that we all walk around going "I-ain't-scared-of-no-Candyman-I-will-cut-you-if-you-say-it-five-times" that also managed to teach us something about how generational evil can come back to bite you. Hard.

Which leads me, of course, to today's horror movie: 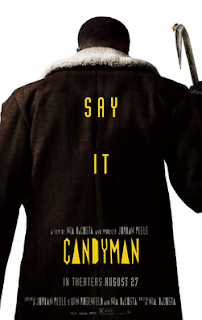 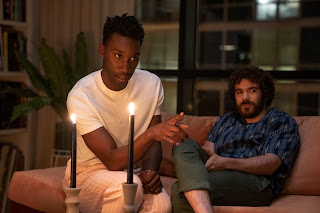 Now, let me just start by saying, for this movie, I was in from the word go. Like, I can't imagine a universe where a horror movie written and produced by Jordan Peele is going to be one that I'm going to dislike. He really had me at Get Out.

And I wasn't familiar with Nia DaCosta's work prior to this, but I'm a fan now. I'm gonna be watching for her. 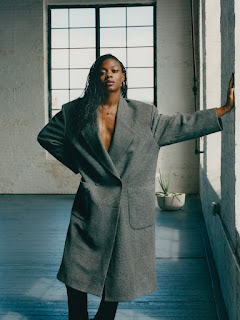 But strong horror pedigree aside, this movie...woo, girl...

Okay, so let me set this up for you. And while I won't be dropping too many spoilers, just as a precaution:

Cuz...I say stuff sometimes and maybe you didn't want to know that and...
Aaaanyway...

Anthony McCoy(Abdul-Mateen II) is an artist in Chicago and his girlfriend Brianna (Parris) is an art curator. While looking for inspiration for his next showing, he stumbles across the Candyman urban legend and the fun begins. 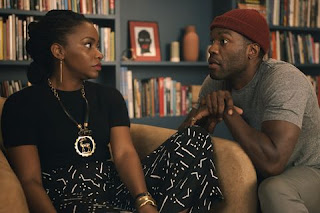 Our protag falls into the all too common trap of "I ain't scared of no ghosts" in horror films and Wow, would you look at that? Here's a ghost with a hook for a hand come to murder you! He makes an exhibit that's a medicine cabinet mirror and when you open it, you see his latest work. A little note on the mirror dares you to say Candyman's name five times.

Nothing bad could happen there, right?

Yeah...people start dying relatively quickly because "Ain't no such thing as Candyman!"  Heh.

And our protag slowly finds that he, himself, is starting to turn into, well...

Yeah, I know. You're going, "hE tUrNs iNtO cAnDyMaN!" Well, you uncultured swine, as it turns out, it isn't quite that simple.

See, our protag becomes a part of a bigger thing, a curse that has resulted from centuries of...well...the systemic treatment of an entire race of people.

What it all boils down to is this: Candyman, my friends, is a supernatural representation of chickens coming home to roost.

But then...I think and have always thought, that that was the original intention of the first movie. You gotta understand, though, 1992 was a different time. While they don't explicitly say, "Yeah, this black dude was lynched and now he comes back and kills people because he's a manifestation of the evils of systemic oppression and bigotry", it was still kind of was the whole point of the story.

(And to those who are like, "But he kills black people too!" who said black people were exempt in the first place? Sometimes, the evils of others spread like a virus killing everyone in its path...you know...like the pandemic.)

But this is also why when I hear someone go "bUt cAnDyMaN iSn'T tHaT GoOd!" what I hear is "YOU WANNA GO, BRO?!"

Yes. Yes, I do. And I will fight you over this movie. I will gladly plant a flag and die on this hill.

Look, all I'm saying is that if you're the type of person that just wants to mindlessly watch blood and gore that's fine. There's no crime in that. In fact, I hear Eli Roth's making a Borderlands movie. 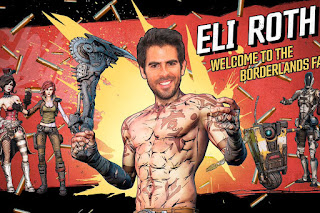 The thing is, some horror movies are terrifying not because they throw blood and gore in your lap. They're terrifying because they tap into how messed up humanity can be. The fact of the matter is that sometimes humanity collectively does really bad things that end up hurting EVERYBODY and what better example of that is there than the Candyman movies?  Dude, what do you do when the vilest most heinous acts against humanity literally become the killer in the dark?

Candyman 2021 is also chock full of callbacks to the original movie. So many that I actually feel like I can't share them even with a spoiler alert. But how about I give you a few hints:

1) If you were paying close enough attention, you'll know where things are going with the protagonist pretty early on.

Being as rabid a fan as I am, I picked up on Anthony's fate pretty early. But that's cool, because it felt more like an easter egg than a spoiler. ;)

2) Yes, of COURSE, there are cameos. Do you really think they could get away with doing this movie without, at least, a picture of Virginia Madsen?? 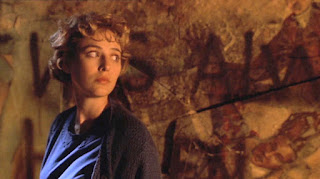 (Not the picture, but you get it) 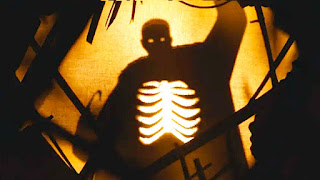 Think they're just a are neat little artsy way of telling the story? Heh. Guess again. (Side note for all the African-American studies students out there.  Pay special attention to the puppet shows...especially the one during the credits.)

4) Checkout the backgrounds and reflections

This is less of a callback to the original movie and more of a flex to DaCosta and Peele's horror pedigree. Recognize some A-horror techniques in there? I did.

All in all, this movie gets top marks across the board from me. It's visually stunning, it's creepy as hell, and you will definitely want to rewatch it a few times. So, yes, of course, this movie gets a jewel.

This isn't something I ever say about a movie, but I think this might be my favorite horror movie. Definitely my favorite one this year.

Next week! I'm pretty sure I'll be watching A Quiet Place 2 finally.  :D

Posted by Ophelia Crane at 9:38 AM No comments: