Get in Loser, We're Going Stabbing

Now, as you might have guessed. This is my favorite time of year. Especially for watching scary movies! Not that I wouldn't be watching them anyway, I mean...

But I figured that the perfect movie to watch for the Halloween season would be, well, Halloween. And since, to date, I have seen every single one in the series (even the third one)...

Why not round out the whole thing with the latest movie? Sounds like fun, right? 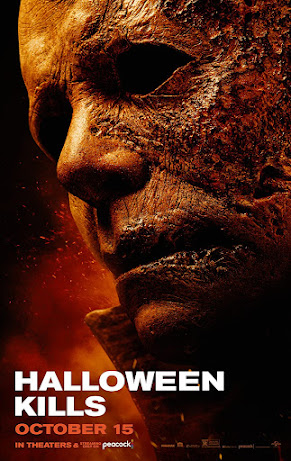 Yeah...it IS a lot...and that's just the cast. I mean, there is a LOT going on in this movie. A whole lot. Since this is a slasher movie, however (kind of a slasher movie anyway), let's do another round of Blood, Boobs, Body Count, and Bad Acting.
But before I do...a few notes and a small synopsis: 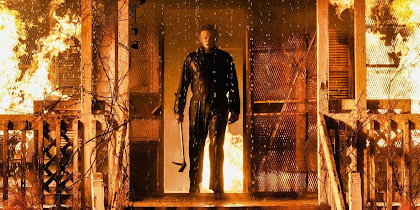 So, Halloween Kills takes place after that last Halloween reboot. You know with crazy Laurie Strode who is not actually related to Michael Myers and we have no idea why he's all stabby? That one? Yeah, that one.

So, when last we left you, Laurie Strode (Curtis, obviously) set Michael Myers ablaze with the help of her daughter, granddaughter, and her big, fancy trap house.

Incidentally, I don't have any real quarrel with the newish direction of this series. We're pretending movies 2-8 didn't happen. Fine, fine. I'm game.
So, here we are at the sequel to this timeline and the fire department comes to put out the fire that Laurie set and stabbings ensue.
Which leads me to the first thing: 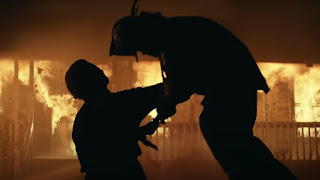 Blood: A
There is a good number of stabby times happening in this movie...albeit with giant spaces in between.
So, as much as I love plot in a horror movie, there is such a thing as way too much damned plot. Apparently, some survivors from the 1978 attacks are still around and, one of them, in particular, is looking for smoke.

Tommy Doyle(Hall), one of the kids Laurie Strode was babysitting back in the day, wants all the smoke with Michael Myers. So much so that he organizes a lynch mob to find and kill him like a dog in the street. It was a valiant effort, but in the end, all they manage to do, really, is cause a panic and kill an innocent escaped mental patient.
Moving on...

Boobs: F+
Honestly, I think they just didn't have time to focus on any titties with all the plot cramming involved in this movie.

Body Count: A+++
So, after some research, I got a few different numbers, but most of them are around 27 kills...which, like everything else in this movie, is a lot. But that's the highlight. Between the long stretches of nonsense plot, the kills are top tier.

Bad Acting: C
I mean, the acting wasn't bad, per see. There are a lot of decent actors doing their thing in this movie, but there was a whole lot of scenery-chewing as well.

It wasn't that bad, but, you get the picture.
All in all, somewhere buried under the message of "staring into the abyss" is a decent slasher flick.  This movie runs an hour and 46 minutes, but it feels like a solid two hours. Sadly, if they cut that time in half, I wouldn't have to do this...but here we are.

It hurts to do that...being one of my favorite series and all.