Every so often, you run into a movie that makes you feel many, many different emotions. Sometimes it's a good thing.  You laugh, you cry, you eat your feelings.

Listen, I've watched a loooot of horror movies in my day and I can confidently say that I've seen a lot of weird shit.  This, though...

Let's just get into it, shall we? 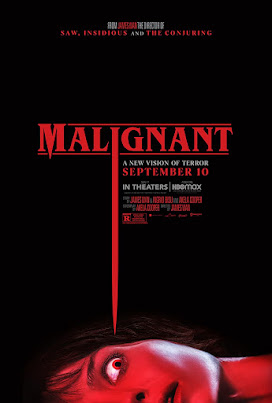 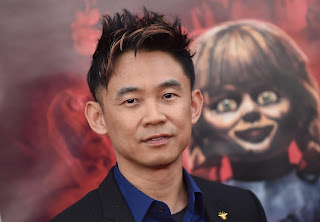 So, James Wan is partially responsible for one of my favorite horror movie franchises of all time, the Saw series. He's also partially responsible for my least favorite horror movie franchise of all time, The Conjuring/Annabelle/Insidious Universe. So, if you've been reading this blog for some time, then you can understand how I could have mixed emotions about this new movie.
But here we go, this is our protag: 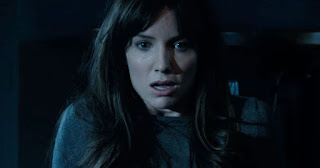 Madison(Wallis) is preggers and her husband is an abusive asshole. One night while she's minding her own business, her husband pushes her into a wall because she had a bunch of miscarriages in the past. 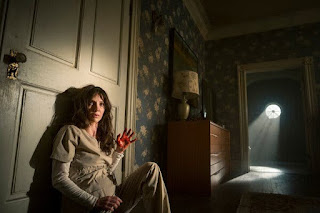 No, you read that right. She talks about her miscarriages, he says, "IMMA PUSH YOU INNA WALL!" But that's okay because a mysterious force offs him pretty spectacularly. Unfortunately, said unseen force also attacks her, causing yet another miscarriage.

Enter officer Kekoa Shaw(Young). Kekoa and his partner start investigating the odd death of Madison's husband.  His partner is immediately suspicious and says, "Madison totally did this."  Kekoa's like, "No, she didn't."

Meanwhile, Madison gets out of the hospital and goes on with her life and meanwhile, meanwhile, her attacker kidnaps a random woman because...well, we'll get to that. 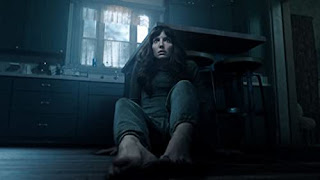 I've been struggling as to whether I would make this spoiler-free or not because it's such a crazy movie that it's hard NOT to talk about the fact that the craziest parts of this movie also involve its really crazy twist endings.
But I figure by now if you're reading this, then you've already seen some of the social media comedians out there, so let's just do this. 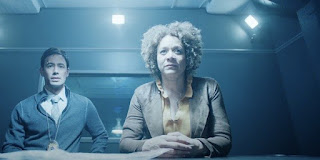 Okay so, Detective Kekoa and his sassy black partner, Regina(White) are investigating the murders of these plastic surgeons. What they find out is that Madison was a patient of this doctor as a child.

Oh, don't worry. It gets better. Dig this.

Madison's adopted sister, Sydney(Hasson) does some digging and finds out that Madison was treated by these plastic surgeons who specialized in fucked up shit. She finds tapes of Madison's time with them as a child and she finds out three really important bits of information.

1) Madison's adopted mom is still alive
2) Madison is a twin
and 3) and probably the most important part of all this, This is Madison's twin:

All right, so at the same time that Sidney is finding this out, Detective Kekoa and his partner have discovered that the kidnapped woman is Madison's mom. After Detective Regina turns to her partner and goes, "I LITERALLY told you so", they arrest Madison.  Madison is attacked in jail which causes her Voldemort twin to wake up and prompts one of the single best moments I've ever seen in a horror movie.

Girl, lemme tell you, you have not lived until you've seen somebody kill a room full of people backward. I mean, would somebody come over here and look at this??

So, needless to say, Madison/Gabriel escapes and decides to finish off their mother, who's in the hospital. Sidney and Detective Kekoa both get taken out, but not before Sidney manages to reach her sister. 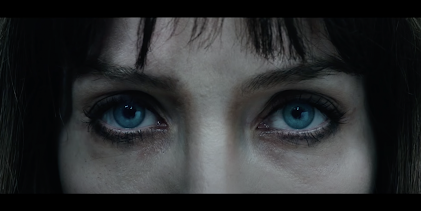 Madison realizes she can control Gabriel just like he controlled her. She takes back her control and manages to push Gabriel back into her subconscious. And...
And that's it. The end. They all live happily ever after, I guess.
So, I suppose the million-dollar question is did I like this movie. I...

I mean, I gotta be real with y'all. It's almost a great movie. Like, this movie drips money. The special effects were top tier and the fact that there were little things that I noticed early on were addressed pretty effectively.

Like I kept thinking "Why does Gabriel move so weird?" and "What are these weird shots with the back of Madison's head?"  Directorially and technically speaking. Solid movie. No complaints.

But the execution of the story kind of sucked.  Sorry, I'm just going to say it.  Things happen for no reason, people do things with no motivation, there's a very real sense of impatience with the actual plot.  It's very "let's just...get to the good parts!  We don't need to tell the story!"
I'm giving it two scores because the plot was just as bad as the rest of the movie was good. So, overall:

But the actual plot:

Next week's movie!!!  Think I'm gonna check out Bloodthirsty as I love a good vampire film...or even a bad one. We'll see.