Bullthit at the House of Death 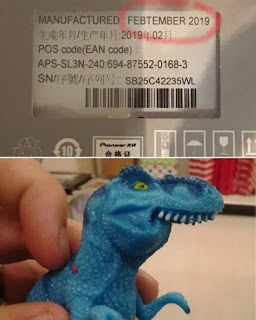 Anyway, this one’s an oldie but a goodie. Not quite in the land of Thriller Double Feature, though. It’s more in the Scary Movie/Airplane realm. 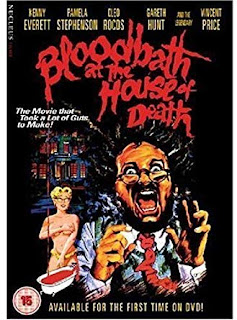 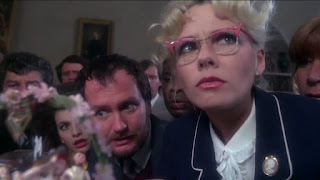 So, the plot is pretty basic. Four sets of scientists go to a house where 18 people were murdered ten years prior and are systematically picked off one by one during the course of the night. In between all that are loads of shenanigans. So, let’s switch things up a little:

Things I Learned From This Movie 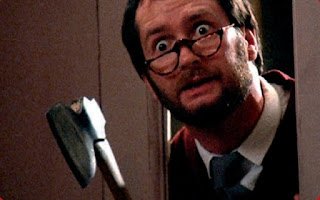 1) Switching accents when you flashback is probably a sign of a mental breakdown.

So, when two of the scientists, Dr. Mandeville (Everett) and his assistant Barbara Coyle (Stephenson) are settling into their room in the old scary house, the subject turns to Dr. Mandeville’s past when he’s triggered by the idea that people might be laughing at him.

Just like a Niagra Falls gag, he flashbacks into a time when he messed up a surgery and all the other surgeons laugh at him. 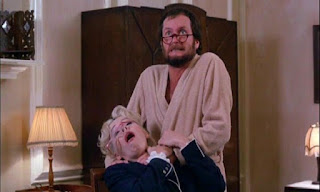 He chokes Ms. Coyle...then wakes up in bed with her. Apparently, random sex happens when he flashbacks.

Just like in at least two Mel Brooks movies, the “what mole” gag is always a winner. They play it up a little further with Deborah (Rocos) and Henry (Hill) who…by the way, say they’re scientists, but I’m not really convinced. Deborah talks about all the men she’s slept with and Henry talks about his “mole”…which is really a large, ugly looking birthmark thing. Whenever she points that out, he says something to the effect of “Mole? What mole?”

Dude, they find a random meat pie in a freezer and go; “Hey, dinner!” Don’t do this. Eating random food never turns out well. 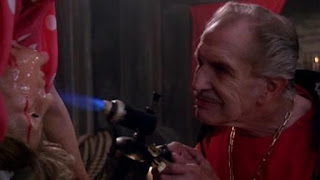 Like seriously. He’s only in a few scenes in this movie, but he spends most of his screentime taking the piss out of his over-theatrical style of acting. As the Sinister Man (That’s his name in the movie! Seriously! It’s in the credits!) he goes on and on in his Edgar Allen Poe style of speech boring the cheese and crackers out of his followers.

It’s also pretty funny when he swears. Which brings me to… 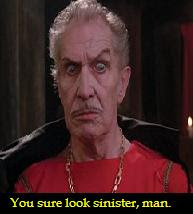 5) The word “faggot” means a bundle of wood.

No, really. It does. I have no idea how it turned into a slur, but language is weird that way. I still wouldn’t advise using it, though. It doesn't work out well for the characters in the movie either. 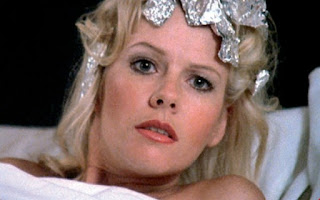 I mean, it sure looked like Coyle was having a blast doing the ghost sex. 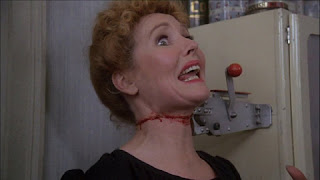 Such as a knife to the mouth through the phone, light saber decapitation, teddy bear stabbing, electrocution to the leg, toilet devouring, throat ripped out by arm demon, can opener to the neck, etc and so forth. 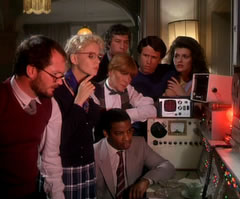 Used only once at the beginning of the movie. I'm still laughing about it. Ith pretty hilariouth.


Surprisingly, I did like this movie a lot. Parodies are weird for me. I will say I don’t like them, but to be honest, I’ve never not laughed at a parody movie. So, this gets a jewel.

Next week's movie is The Curse of Halloween Jack. The cover suggests about four movies I've seen before so...not sure if I've seen this one. Guess we'll find out!

Posted by Ophelia Crane at 9:08 PM