And he says: "Can You Put Me Up For The Night?"

Hey there Horror Nuts! Welcome to another WTFHM!

Hope you had a good Thanksgiving! I know I did, though, I’m a tank low on my daily sweet potato pie intake for the year. I’m going to need a refill soon. Send pie!

Okay, so, I didn’t have a review last week because…well, to be honest, I was still trying to figure out how to write about this week’s movie.

Or anything. Rather the opposite actually. This isn’t a movie that requires any level of deep introspective thought…however, I suspect the filmmakers desperately want you to think deeply and introspectively about this movie. 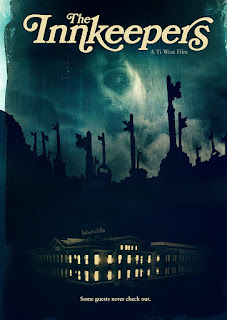 Yes, there are other people in this movie. Those are the only ones worth mentioning. (And Lena Dunham is more of a cameo, actually).

So, yeah here’s how it breaks down. 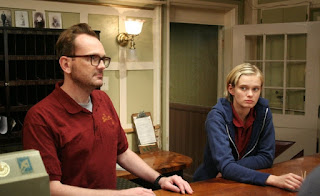 Claire (Paxton) and Luke (Healy) are stuck working the final weekend of an inn that’s due to close. There are only a few people in the hotel. An unreasonably angry mother and a retired tv actress, Leanne Reese-Jones(McGillis) that Claire totally fangirls over.

So, side note, Claire and Luke are ghosthunters and Luke tells Claire that the spirit of Madeline O’Malley still haunts the hotel and this would be a GREAT time to do some ghost hunting…you know…since nobody’s really there anyway. She’s doubtful, but he totally got footage of her that last time so it exists.

Claire takes towels to Leanne’s room (which is a theme. No one gets enough towels at this hotel for some reason) and goes:

So, yeah, never meet your heroes. 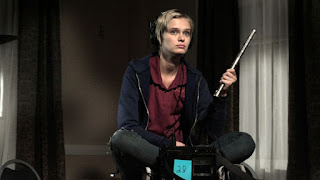 So, Claire here’s weird noises around the hotel and decides to do some EVP work. She manages to pick up some whispering and piano music.

Claire runs to Luke all:

So, Claire happens to run into Leanne who uses the moment to tell her that she’s a medium. She’s in town for a psychic convention event.

She tells Claire, “So, don’t go into the basement.”
Claire: “Why not?”
Leanne: “Because you’re probably going to die.”
Claire: “Okay.” 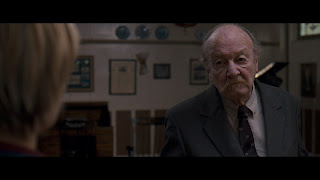 Okay, so, the next day they get another client, an old man looking for a specific room. The room he’s asking for has been stripped down already. Claire feels bad for the old man and tells him that they’ll put some sheets down for him…and maybe get him some towels. (They don’t, by the way).

So, Luke and Claire are talking about ghosthunting and Claire’s like: “Leanne said don’t go in the basement.” 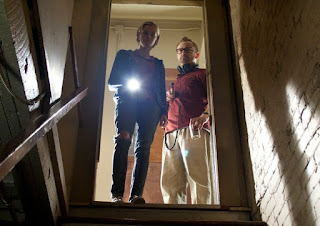 Okay. So, dig this. They go into the basement and they do the ghost hunter work and sure enough, they start hearing disembodied voices and a lot of freaky stuff…the most freaky of which only Claire sees. 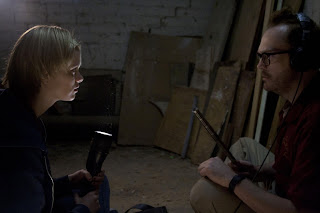 Luke becomes so panicked that he dips out completely, leaving Claire all alone to deal with the Madeline ghost…well, not all alone.

Let’s pause for a second. So, all the stuff Claire experiences is mostly all her. Like, there’s actually the impression that maybe there might be a twist at the end, that it’s all in her head…which for me, would have saved this movie. 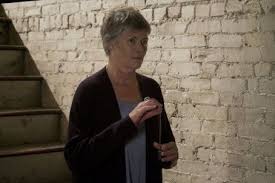 She wakes up Leanne and begs her for her help. Leanne goes to the basement and makes contact with the spirit. After which, she’s so freaked out that she tells Claire:

Claire agrees and runs upstairs to tell their only other tenant, the old man that came in earlier.  (No, I didn’t forget about the angry mom. She left…angrily.) 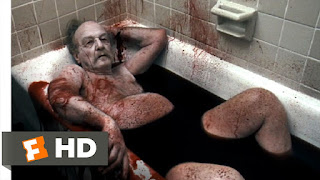 The old man, of course, is dead. He commits suicide by slicing his wrists in the bathtub.

In a panic, Claire runs out of the room and runs into Luke. (Hey, he came back!) She regurgitates everything that’s happened so far in one breath and he freaks out and runs away…again…

She turns around, gets scared by the dead ghost of the suicided old man and falls down the stairs into the basement…where she’s terrorized by the ghost of the hotel…until she dies. 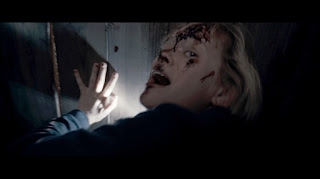 Yeah, I didn’t like this movie. Actually, that’s not true. The movie was tolerable so long as you start thinking that maybe, just maybe there’s a twist ending or something more significant going on instead of exactly what they told you was going on at the beginning of the movie.

It gets a raspberry. For lack of originality…and generally giving us exactly what they said they were going to give us. I’m mean, how dare they?

So, next week! We’re tackling the Insidious series. I hear people like it…I guess I’m going to find out why?