The Movie They Should Have Made in 2009

Have you ever not enjoyed a movie that everyone else seemed to love? I mean, sure, if you've been reading this blog for a while, then you know the movies I end up enjoying don't often line up with what everyone else is into.

I'm saying, I'm usually the one who raves about a movie that everyone else loathes, and, you know, that's okay. Don't follow the crowd, people! If you hate a movie, say so.
Case in point, there's this movie:

The original Orphan movie is really not one of my favorites for a few different reasons.
1) It's wholly unoriginal. It's The Bad Seed and The Good Son and The Omen and The Hand That Rocks the Cradle, with a twist that I saw coming halfway through the first act of the film.

2) There's no satisfaction in the movie? It's been a minute since I've seen it, but I remember the ending just being not satisfying enough for me. Maybe Esther needed to kill more people, I don't know. But the movie's ending just had me like, "Well, yeah, because that's how all these movies end, so..."
The long and short of it is that Orphan is a movie I've seen so many times I probably could have written a complete review of it without ever seeing it, and no one would have ever known the wiser.
Which brings us to This week's movie! 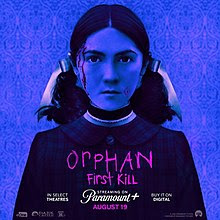 Because you guys are not gonna understand my rating unless I spoil the hell out of this thing. 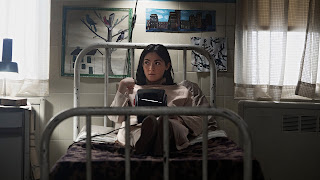 So, once upon a time, there was a girl named Leena(Fuhrman). Leena lives in Estonian Arkham Asylum, you know because she's criminally insane. 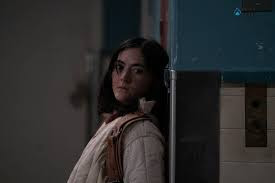 Leena, being criminally insane, decides to break out and get to causing havoc as one does.
Now, before we move forward, we need to address the thirteen-year-old elephant in the room. 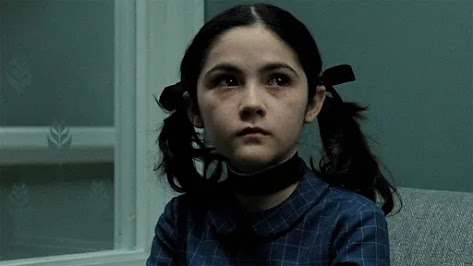 Back in 2009, Isabelle Fuhrman was around 12 years old, and if we're all being real, she actually looked around nine or ten.

Which worked and, by the way, is the one good thing I can say about both films. Fuhrman was and is a pretty talented actress to have pulled this part off so well. She was so phenomenal, the filmmakers decided to bring her back for the prequel!

No, no, you're right. The math is indeed not mathing.
So, fun fact, instead of getting a child actress to take over the part, the filmmakers decided to do some creative camera angles and body doubles and...lifts for the whole cast like this: 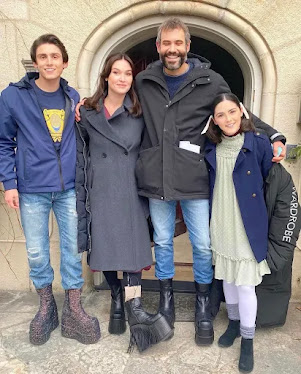 Which, I'm like, okay, except it just wasn't working. Fuhrman just ends up looking like a very short grown-ass woman. For all the work the filmmakers did to restore the illusion that little Leena could pass as a little girl, they ended up with...well, with this: 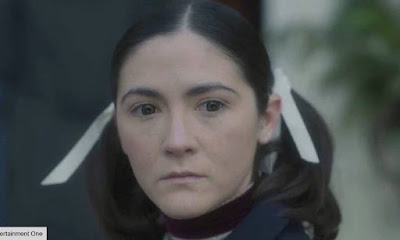 She is all of twenty-five in pigtails, and there is just no hiding it. I don't know. Maybe the makeup guy quit at the last second or something because we are living in the same year where we were able to do this: 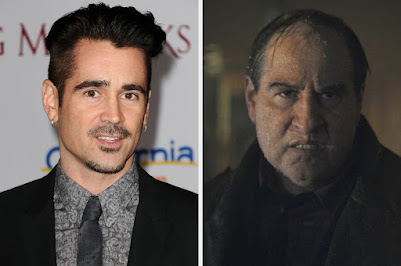 But little to no effort was made on Fuhrman's actual appearance to at least try to fool us into thinking she was a child.
I wouldn't normally spend this much time on something like this, but, bruh. It's part of the whole damn plot. We're just kind of left thinking that everyone in the movie needs glasses.
But anyway...

After leaving a wake of bodies behind her during her daring escape, Leena decides to pose as a child who went missing four years ago. Kid kind of looks like her, so she figures, what the hay? 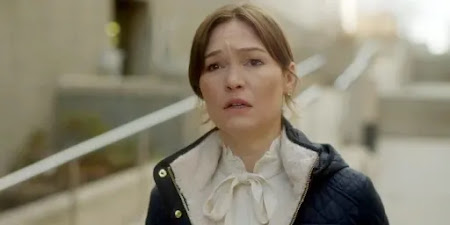 So, as it turns out, the real Esther's parents are richer than God, which, hey, is a plus for someone with a habit of ripping people off. So, she poses as Esther and meets her new mom Tricia(Stiles), new dad Allen(Sutherland), and kind of assholey brother Gunnar(Finlan).

And everything seems to be going well. Esther immediately gets attached to dad Allen who, admittedly, makes some pretty cool paintings. She paints with him and, just like in the first movie, starts to develop a crush on him. 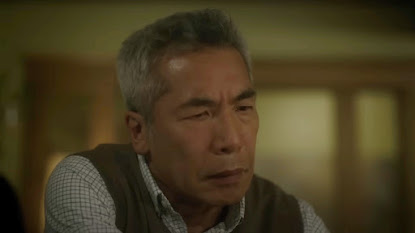 Otherwise, everything's Gucci until Esther starts to notice the detective that 'found' her snooping around her and the family. After a very strange visit with him asking to speak with the mom, Esther decides to take matters into her own hands.

Something like that, except angrier? She stabbed the detective until her hand cramps, and as she's questioning him about how he found out about her... 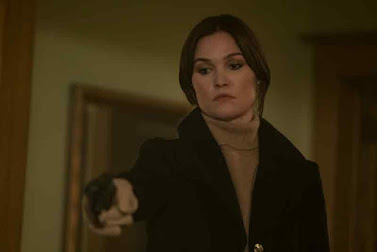 Enter Tricia, who puts a hole in the detective's head, finishing him off. 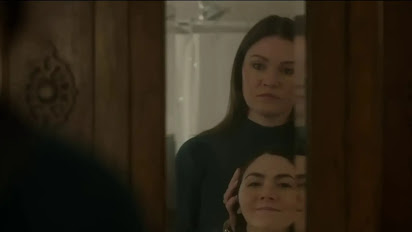 As it turns out, Tricia has known that Esther was not Esther all along...because Gunnar "accidentally" killed Esther years ago, and she covered up the murder. But now, her husband is like a new man, so she blackmails Esther into keeping up the charade. 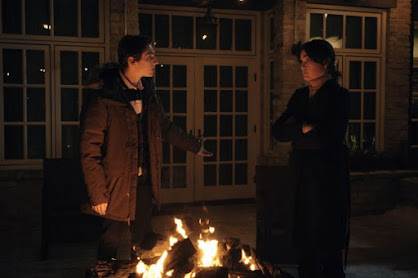 Yeah, old Gunnar is a bigger dick than we thought. Moving on. 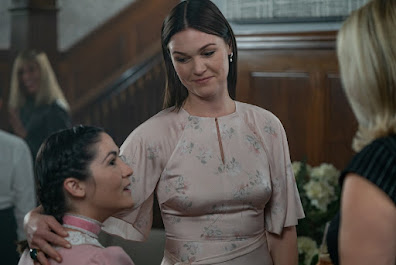 So, the charade begins, and for a minute, it's all good. Esther just plays the role and stays out of the psycho mom and son combo, right?

Yeah, no. Gunnar's still an asshole, and Esther still has a crush on Allen, which, of course, Tricia confronts her about.

Well, this all puts Esther in a kill-or-be-killed mindset. She sets it all off by trying to kill both mother and son by pushing them on some train tracks. It fails, and she steals the family car--

Yeah, I don't know where she was going, but it was giving me life. Anyway... 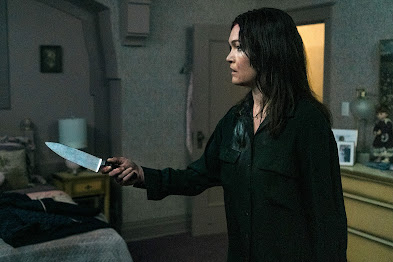 The cops bring her back home, and Tricia and Gunnar decide this game is over and they need to kill Esther...which, given everything we know thus far, is not going to turn out well.
And it doesn't! Esther catches Gunnar in her dad's painting room...

And she fights Tricia all through the house, starting a fire and ending up with them on the roof. 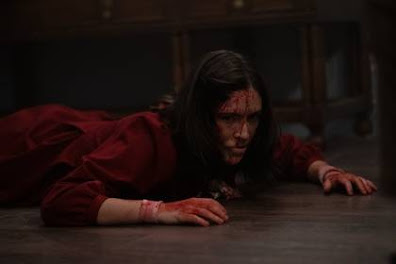 Okay, so Allen comes back just as the two of them are hanging off the edge of the roof, leaving him with the eternal question of if one's wife and child were in a fire, who would they save first.
Welp. It wasn't Tricia because she ends up falling to her death.

But after Allen pulls Esther up, this kind of happens...

He's horrified that his little girl is really a grown woman with false teeth, and in the ensuing argument, he, too, falls to his death.

And so, with the whole family dead, Esther walks out of the burning house, and the authorities put her in an orphanage where someone would eventually adopt her again.

Yeah, that's the movie. So, what did we learn?

Well, we learned that prequels suck...except when they don't.
We also learned that dressing up as a grown woman to be a little girl does not mean she's a little girl, but we knew that in both movies, really, just in different ways.
And, yes, of course, this is jewel worthy.