Fear of a Black Goo 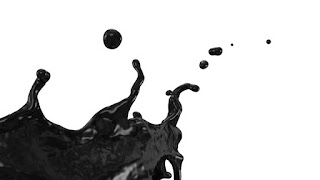 What up People! It’s time for another edition of Will Twerk for Horror Movies!

For those of you who don’t know, in my humble little town of Detroit, MI, there used to be a Saturday morning television show called Thriller Double Feature on one of the local channels. On this television show, I got my first education in horror. Every week, I would be treated to B-movies of all levels of horror – the gory, the dramatic, even some of the super old school horror from the 60s and 70s. About 80 percent of them were either super gory, super campy, or had a seriously high what-the-hell-did-I-just-watch factor to them.

Why am I taking you along with me on this trip down memory lane? We-hell, I’m so glad you asked! 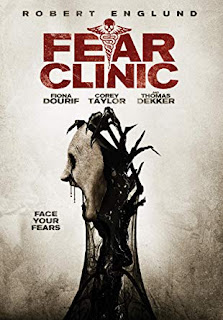 Yes. You read that right. Chuckie’s daughter, Freddy Krueger and the guy from Slipknot is in this movie. Sounds like it’s gonna be a pretty sweet movie, right?

(And Cleopatra Coleman, Felisha Terrell, Brandon Beemer, Bonnie Morgan, Angelina Armani, and Thomas Dekker were also in this movie, by the way.) 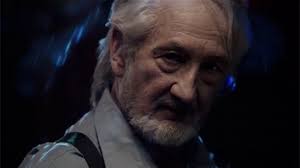 So, okay, Dr. Andover (Englund) is a doctor in “The Fear Clinic”, a clinic that deals exclusively in eradicating phobias by putting the patients in Andover’s special machine that somehow stimulates the amygdala and…I guess it stops fears? 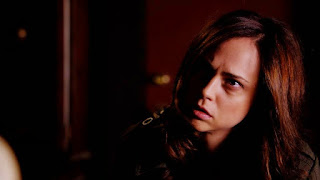 Okay, so enter Sara (Dourif) who’s dealing with PTSD from a shooting attack she and several others survived. See, all of the people who went to the Fear Clinic originally were involved in the attack as well and everyone had their phobias amplified. Sara and the others were cured, except they weren’t. All of a sudden, they start hallucinating images related to the shooting. 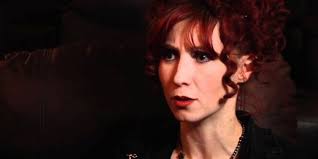 So, Dr. Andover has closed the clinic since one of the victims, Paige (Morgan), died during the procedure, which is fine until Sara shows up on his doorstep and tells him to fire up the machine again because she’s seeing masked men in closets. Andover is like no, Sara’s like, whatever, dude. We’re doing this.

Just then, another of Andover’s former shooting survivor, Caylee(Armani) and her boyfriend show up on the doorstep and demand to be treated. Caylee’s fear has something to do with anorexia and she hasn’t been eating. Sara goes to help her and Caylee vomits black goo all over her.

We’re gonna pause this synopsis for a second because I need to make you aware of something. Sometimes Thriller Double Feature movies would more often than not feature gross-out, Fangoria type movies. Movies that usually involved funny colored vomit or things covered in slime and goo and twisted monsters dripping in something. This is one of those times. So, be prepared.

Okay, so the black fluid apparently makes people hallucinate when they touch it. Sara accidentally gets some on her mouth when she takes her shirt off in the bathroom and sees scary shit, Dr. Andover is transported into a netherworld where his dead patient, Paige is waiting for him.

So, to round everything out, another victim shows up sometime later by the name of Blake (Dekker). Blake is in a wheelchair and can’t talk because he, apparently, was shot in the head during the attack. Andover puts him in the device and immediately discovers something isn’t quite right with Blake’s recollection of the events. He starts to think there’s something weird going on.

Yeah. Here, he starts to think something weird is going on.

Okay, so Sara discovers that after Blake’s turn in the chamber, he has regained the ability to speak. Sara goes to Andover like “Isn’t this great?” Andover’s all like “…No.”

Sara’s bestie Megan (Coleman) shows up at the clinic after having a few freak outs herself. She also has a weird festering sore on her back. Andover’s assistant takes her in the back and does a little surgery on it. As soon as she cuts into it, Yay! More black goo. 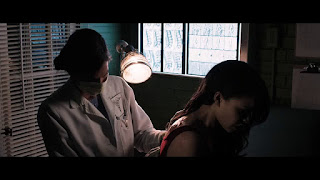 And spiders! Lots of Spiders! The spiders find their way down into the basement and become a part of a vibrating cocoon.

Meanwhile, Andover is in a therapy session with Blake and he’s giving him the third degree about what he actually remembers. Where was he sitting?! What did he see?! Who is he really?!

Blake has no idea what Andover is ranting about. Their session is interrupted when one of his assistants come in to tell him that Megan has gone into the fear machine. Andover goes to get her out, only to get sucked into the machine himself and into the big cocoon in the basement. 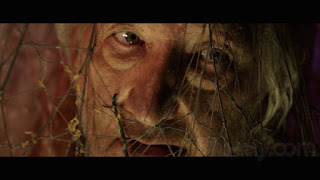 So, while Andover is in the cocoon, Sara pulls her bestie out of the fear machine and she’s catatonic. The handyman, Bauer(Taylor) comes in and tells them that there’s no getting out of the house because that black stuff is everywhere and it’s sealed up the doors and windows. 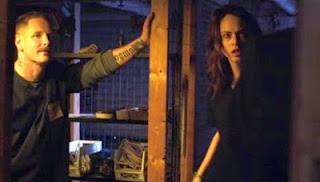 Meanwhile, Blake finds a mask that just happens to be the exact same one the shooter that shot everyone had. Then he starts to remember, “Hey! Plot Twist! I’m the shooter!” 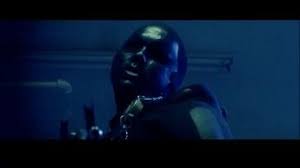 That’s right, folks. Blake was the one who shot them all in that diner before shooting himself in the head, pretty much rendering him a vegetable up until about thirty-five minutes into this movie.

So, he puts on the mask and becomes the shooter again, seeking out his victims once again.

Now. In the meanwhile - meanwhile, Sara locates Dr. Andover’s paperwork and discovers that he had a theory that there is a fear creature and said fear creature is a manifestation of fear and the fear chamber was starving the creature of the one thing is thrives on – fear. 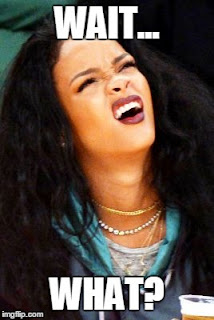 Yeah. So, Andover’s in the cocoon and Paige – the first girl to die in the chamber – shows up, only she’s a demon version of herself. Or rather a Fear Monster version. So, she takes over Andover’s body and comes out of the cocoon to start killing people. 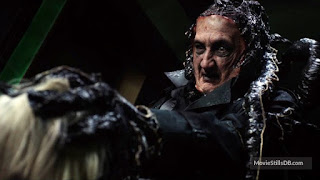 I know! I know! But wait, it gets worst.

So, the next few minutes become a murder/catatonic spree with Blake the shooter and Andover the fear monster. In the end, Sara figures out that if the fear creature’s victims close their eyes, then the fear creature would go away. So…she does. Blake, Caylee, Megan, she gets all their eyes closed which, subsequently destroys the Andover/Fear Monster.

Andover is freed from the Fear Monster, but he tells Sara that the monster would be back so long as there is a door to come through…you know…the fear chamber. Sara tells him that they have to change the locks and Andover gets into the machine as she supervised.

*sigh*
So, you thought that if any of this sounded like I was making it up as I was going along, you’re not alone. Pretty sure that’s how the screenplay was written.

I don’t have the heart to Raspberry this one. I mean, it was decidedly terrible, but I’ve seen far worse and it made me a little nostalgic for my childhood. And, you know, Fiona Dourif, Freddy and Corey Taylor and such.

So, yeah. It’s getting a jewel for the culture.

Next week’s movie? “The Fearless Vampire Killers Or: Pardon Me, But Your Teeth Are In My Neck”. I do enjoy silly horror movies! Here’s hoping for a good one!