Demons, Demons Everywhere and Not a Drop to Drink

Hey, everybody! So you might’ve noticed that I missed two whole weeks in a row. Well, if you’ve been keeping up with the blog, then you know that those two weeks was time I spent following my dream to take over the world…with my books. :D

So, yeah, for info on how my book fairs went, head over to my website and click on the News link.

Okay, so, since I bailed on your guys for two weeks in a row, I suppose I owe you a double feature. Let’s get on with it, then. 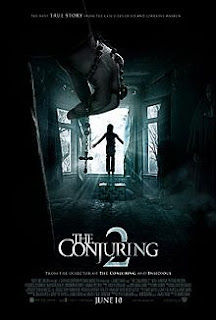 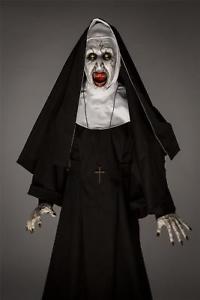 Arguably, one of the coolest monster makeup jobs.

Now, when last you left WTFH, I made the statement that I wasn’t really expecting very much out of this one. Saw the first one in the theatre and totally fell for the whole “It’s the scariest movie you’ll ever see” movie voice and I was not impressed, even though all my people kept saying things like: “WHAT DO YOU MEAN YOU DIDN’T LIKE THE CONJURING??? IT WAS SO SCARY! WHAT’S WRONG WITH YOU? ARE YOU A COMMUNIST OR SOMETHING?”

Yeah, yeah, I watch a lot of horror movies and yeah, maybe I’m a little more desensitized than most people. But I’ve also watched enough horror movies to know scary when I see it, even if it doesn’t keep me up at night and The Conjuring did not keep me awake at night. It barely kept me awake in the theatre.

Well, lemme set the scene for you. If you’ve seen part one, then you know that we, the audience, are following the adventures of Ed and Lorraine Warren, Ghostbusters. Now, these stories are also “based on a true story”, which, FYI, means everything from “everything in this thing happened just like we’re telling you” to “well, at least, the names are spelled right”. The debate on where that falls for the Warrens is one that’s been historically and fervently documented for the better part of thirty years. I’m not going to dive into that pool for this review, though. It’s kind of better to leave everything you might know about the Warrens in the hall before you walk through the door.

So, in this movie, Ed (Wilson) and Lorraine (Farmiga) have decided to retire from ghostbusting as it’s getting to be too much for Lorraine. The whole Amityville thing went a little sideways when Lorraine witnesses her husband die in a vision, so, Lorraine convinces Ed that maybe it’s time to hang up the old medium hat. 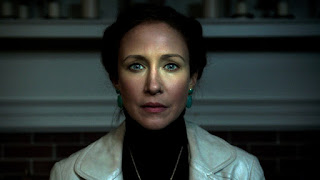 Meanwhile, in London, the Hodgeson family suddenly starts experiencing supernatural occurrences in their little flat. Occurrences that begin with the middle child, Janet (Wolfe), who decides it would be fun to play with a homemade Ouija board. Pretty soon, little Reagan Janet becomes possessed by the ghost that lives in their house. 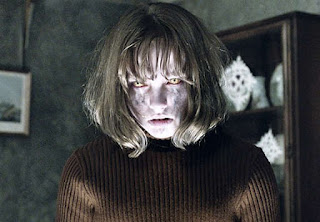 Things quickly get out of hand and before long, news of the Hodgeson’s case reached the Warrens. They go out to investigate at the behest of the church, who want to know if this is a hoax before they do the whole “The power of God compels you” thing on little Janet.

So, they go, much to Lorraine’s dismay. This is where things get interesting. Weird and messed up things start happening to everyone, but very little is actually documented conclusively. Most of what The Warrens (and other Ghostbusters that have decided to join them…I don’t remember why) experience, they experience firsthand. To make matters worse, little Janet is caught on tape faking a poltergeist attack. Once the Ghostbusters see the footage, they decide that the whole thing is a waste of time and pack their things to leave, much to the Hodgeson’s dismay. And as soon as they dip out, Janet is promptly attacked by the evil Demon Nun ghost. 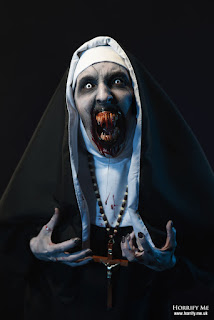 Fortunately for her, The Warrens figure out that the ghost made her fake the incident and rush back just in time to save her in an epic battle in the rain...because it looks more awesome that way. 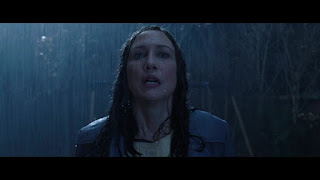 Now, I know all of that sounds a little meh, but I’m leaving out a lot of detail to the story. It actually plays out in a way that makes enough sense to keep your attention. Wilson and Farmiga as The Warrens come off as downright pleasant, even likable. I actually found myself rooting for them by the end of the movie. Plus, some pretty neat things happen special effects wise. Like this for example: 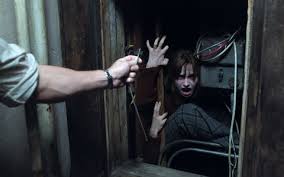 What the heck are you looking at, you ask? She's in the wall, folks. In the freaking wall.

So, as much I really don’t want to, I begrudgingly give The Conjuring 2 a jewel. I’m not a fan of the franchise and the first one sucked, but at the end of the day, good is good and part 2 was actually pretty well done.

Okay, so next movie: 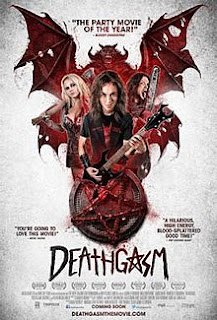 I’m not kidding. It’s really freakin’ gory. Do not watch this one while eating.

So, the story goes that Brodie’s (Cawthorne) father passes away and his meth addict mother is put away in a mental institution for doing crazy meth addict things. He’s sent away to live with his Aunt (Rimmer) and Uncle (Moy) in the small town of Greypoint. Brodie hates it because it’s a small town and Brodie is a metalhead. His love of metal directly clashes with his Uncle’s Christian values and his cousin David (Hoskins-Smith) is a jock and a bully and hates him because he’s a metalhead.

Brodie finds friends, however, in two nerdy kids Giles(Cresswell) and Dion(Berkley) and fellow metalhead Zakk (Blake)…who by the way looks a lot like Danzig...except taller... 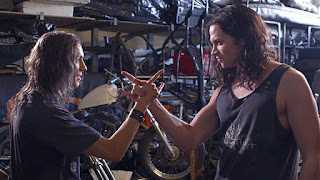 So, Brodie and his new friends decide to form a metal band, aptly named Deathgasm. During their adventures, they discover that legendary Rock God, Rikki Daggers (Ure) lived in an abandoned house somewhere in town. They find said house and, subsequently, find Daggers. After Daggers gives them one of his albums and tells them to guard it with their lives, they go back home only to find they’ve been Rick-Rolled with a Rick Astley album. 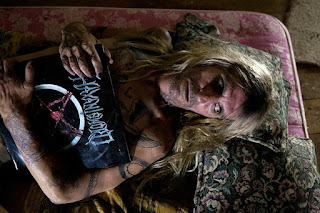 Okay, so, in the album cover they find mysterious sheet music and decide to play it. That’s about when things enter the “It’s so metal that” realm of the movie.

The song is so metal that it possesses the whole town, turning everyone except the band members (and Brodie’s love interest) into Evil Dead style Deadites. 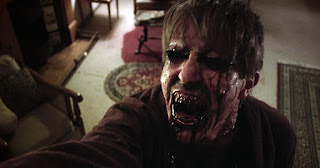 They kill the Metal Deadites in many, many metal ways. Ax to the face, Weedwacker to the junk, etc. But the most imaginative was when Brodie and Zakk are forced to kill his aunt and uncle using sex toys.
You read that right. And now I bet you’re wondering how you kill a Deadite with a Rabbit. 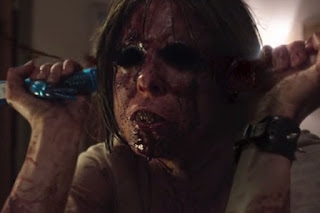 Okay, so, this movie isn’t Shakespeare, but as I always say, in horror, you don’t have to. Just be entertaining. And this movie is that. Lots of blood, lots of gore, and in the end, our heroes saved the world using the power of Metal. 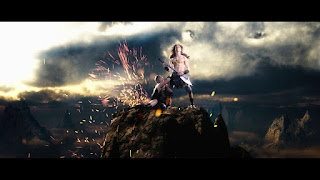 So, yeah, totally getting a jewel from me. It was exactly what I expected and I felt like I got a little blood on me by the end of the movie, which is always a plus.

All right, so next week I open the Pandora’s box that is Six Degrees of Kevin Bacon with “The Darkness”. Never seen it and I really have no idea what to expect. See you next week, folks.