Conjuring Out Here Making Me a Liar

I know, I know. All y’all out there love these movies and for the most part, I gotta tell you, I don’t get it. Most of these movies are, in my humble opinion, okay at best.

Before you at me...I said most of these movies. As I’m sure I’ve said before, I have watched a lot of horror movies over the course of a lot of years. I could be a little jaded.

Which brings us to this week’s movie: 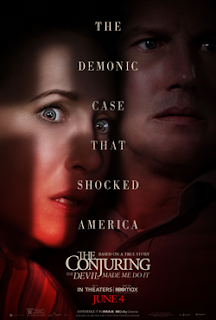 So, first of all, as with all current movies, I have to issue a spoiler alert.  I’m gonna be running down the whole movie, here, so close your eyes if you don’t want to see it.

Second of all, I want to note that in the Conjuring Universe, there’s apparently a timeline between all these movies. If you’re at all interested in watching them in chronological order according to the plot, here you go.

If you’ve been keeping up on the movies, though and you’re worried you’re watching them out of sequence, don’t sweat it. This movie turns out to be the latest in the timeline as well as in release date. In other words, you’re not missing anything. 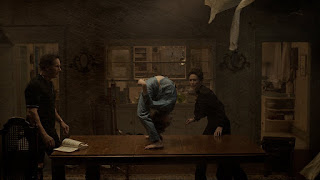 Okay, so in this installment, our heroes, Ed and Lorraine Warren are in the middle of exorcising a demon from a young boy, David(Hilliard).  During the ritual, his older sister’s boyfriend, Arne(O’Connor), entices the demon to take him instead, which it does, as demons are wont to do.

Fast forward to some time later, Ed is recovering from a heart attack that happened during the exorcism. He wakes up from it and tells Lorraine that she has to warn the family about the boyfriend. 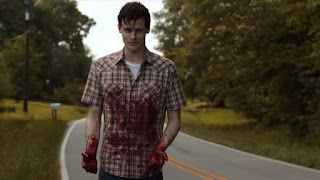 She calls the police, but by then it’s too late. Arne went ham on his landlord while he’s in the middle of partying pretty hard at 3 pm on a Tuesday. 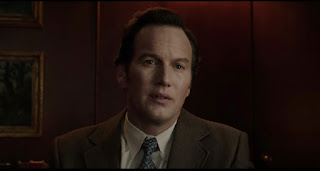 Okay, so. Arne is arrested and Ed and Lorraine get him an attorney that will plead the case of him being possessed, thus becoming the first case in history to use the argument of demonic possession.

As per the tagline, The case of Arne Johnson is a real thing that happened and the real-life Warrens were involved.  Here’s a link to details on the real case, if you’re interested.

So, anyway, the Warrens are tasked with looking up how David became possessed in the first place. They go to the house, do a little flashbacking which leads them under the house where they find a “witches totem”. 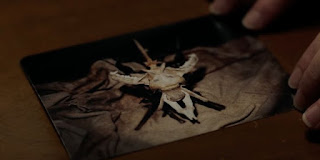 The Warrens do a little research and find that the totem comes from the disciples of the Ram cult, (which you might remember from one of the Annabelle). So, now, they need to find out WHO from the cult is involved. 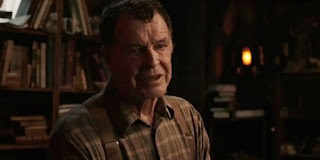 They decide to look up a defunct priest, Kastner(Noble) who dealt with them before. Kastner explains that somebody was using the totem to possess a demon to possess a person to commit a human sacrifice which seems like kind of a Russian Nesting doll kind of way of doing a thing, but, whatever.

Anyway, the Warrens are like, Okay, so we should look for other cases similar to this one and they find one. In Massachusetts, they investigate a missing girl, who, it turns out, murdered her… 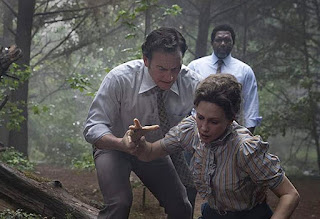 K, they don’t say it, but the girl appears to be her lover, maybe?  Anyway, the story goes that the girl lures her bestie/girlfriend out into the woods and stabs her 22 times before throwing herself off a cliff. We know this because Lorraine does the psychic thing she does and it gets real dramatic, there. 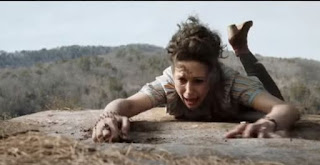 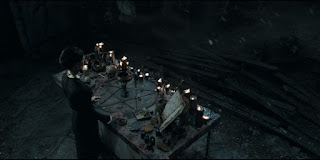 So, while the detectives are recovering the missing girl’s body, Lorraine gets a psychic preview into what’s going on with Arne. See, the occultist doing the whole possession puppet show is trying to convince Arne to kill himself while he’s in prison. It’s fine, though. Lorraine stops her psychically-wise.

But, see, NOW, the bad guy knows who she is and that’s real bad for the Warrens.

The occultist decides to possess Ed and Ed almost stabs Lorraine which makes me think that is some love for your ass, folks because I’m asking for a divorce if you try to kill me, demon or no demon.

But, really, that’s probably just a Tuesday for the Warrens, so…

Anyway, they find another totem in their house and threw ghost detective ingenuity, figure out that they have to get to the occultist’s altar and destroy the totem on it to break the curse plaguing Arne Johnson and, well, them too, now.

Lorraine goes back to Kastner’s house and finds out that the occultist is Kastner’s kid, Isla(Bondurant). 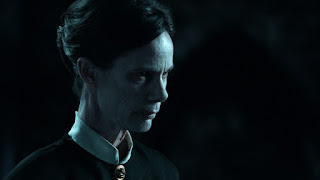 See, she became fascinated with the Ram Cult while Kastner was investigating it. Isla’s curse breaks down like: She needs three sacrifices - The Lover (The missing girl), The Child (David and now Arne), and A Man of God (Ed). 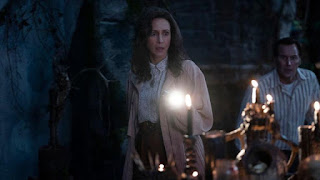 Kastner shows Lorraine where the altar is, Ed shows up in there somewhere and gets himself possessed again, Lorraine goes all, REMEMBER YOU LOVE ME and he snaps out of it, destroying the idol and the altar. 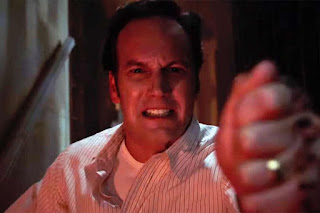 And the cup from the altar is added to the Ed and Lorraine museum of creepy shit. 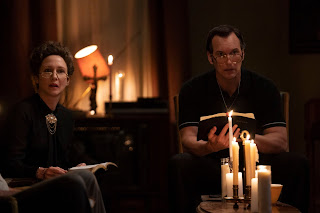 So, once again, the Conjuring series has proved me a liar...sort of.  Apparently, in the Conjuring Universe, the Ed and Lorraine chronicles are legit. I can’t say for the Annabelle/La Corona/Nun stuff…(well...yes I can, actually)

But so far, I’m actually kind of invested over here. Seriously debating taking a day and watching the entire series in order at this point. So, yeah. Jewels all around.

Okay, so next week!  Not sure what I’m going to watch.  Gonna try A Quiet Place 2, but we’ll see.